1897 Von den Steinen “too late” in the Marquesas 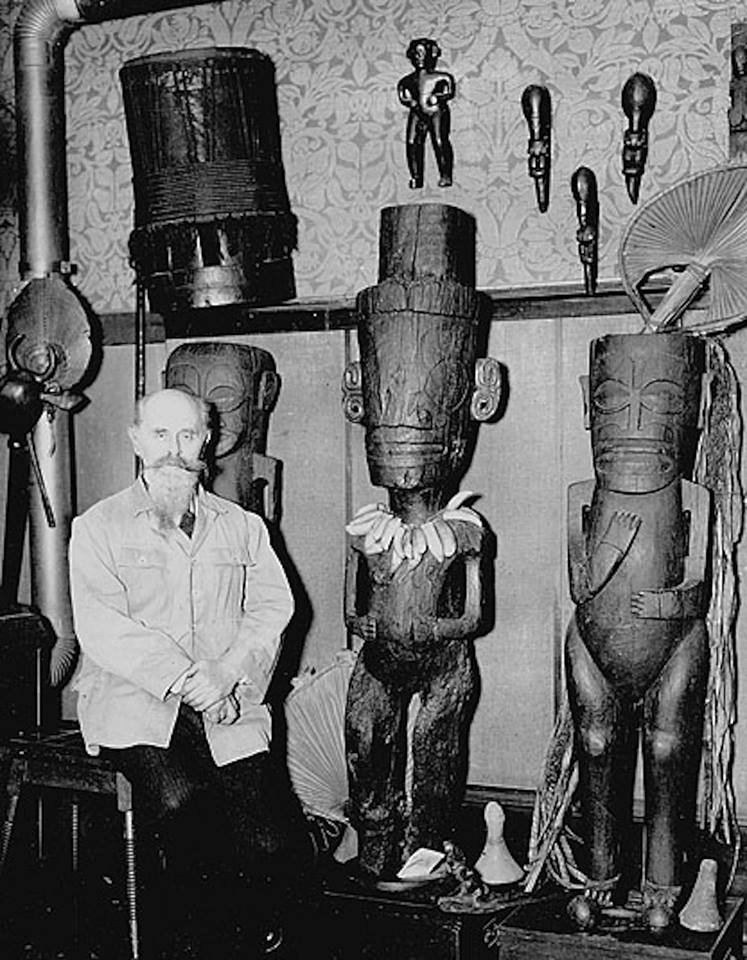 This photo is a valuable document: it shows Karl von den Steinen in Europe, next to him, a tree of wooden tiki bread he had bought in France and who sports a sperm whale tooth necklace with a singular history. The anthropologist had bought them before leaving for the Marquesas in order to exchange them against objects. But unfortunately for him, at the end of the nineteenth century, no one in the Marquesas was not interested in the teeth once so precious and brought them back to Germany where he fashioned this necklace for his tiki.
PAPEETE, June 21, 2019. When you think of Karl von den Steinen in the Pacific, we inevitably think of the Marquesas Islands, which can legitimately think that this German saved what could still be the cultural heritage of the Land of Men . But if returned to stay in the Marquesas this science in context, you soon realize that there is finally spent six months on a life of seventy-four anyway. How this man he was able to do so in a half of work?


If you are told Die Kunst und ihre Marquesaner: Studien über die Entwicklung primitiver Südseeornamentik nach dem Material eigenem Reiseergebnissen und der Museum “3 vols, Berlin. D. Reimer (E. Vohsen) 1925, there is little chance, except that you are pro-German, to capture your attention. 1925 is indeed the year in court which Karl von den Steinen had published the first of three volumes of his monumental work dedicated to the Marquesas archipelago he had traveled six months, twenty-eight years before. Twenty-eight years to write three books, this may seem a lot; but in reality, half of that “Charles Stones” (if translated into French his name) went to the Marquesas was only the preamble of a huge, an incredible work of identification and description of all the parts,

A quarter century of research 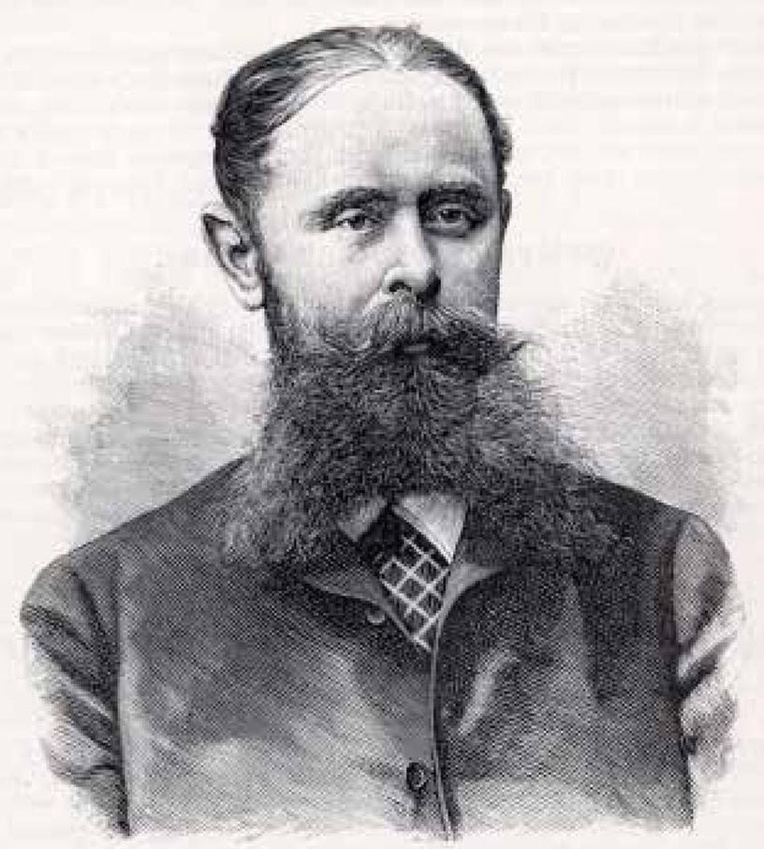 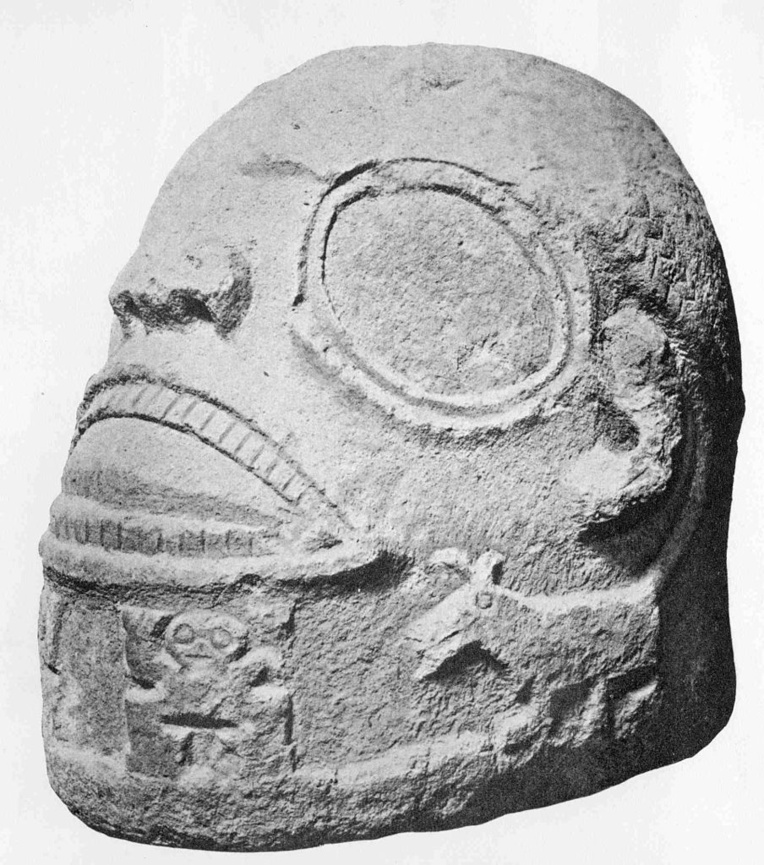 This tiki head was brought in Germany by von den Steinen; it probably comes from the site Puamau; There she will ever return?
But back to the past of this extraordinary character, who remains in the history of ethnology not as a specialist in the Marquesas, but as a very great name of ethnology in Brazil.

Raised by his grandparents, in a studious atmosphere, he entered the University from seventeen to become a doctor, degree he obtained at the age of twenty, having gone through Bonn, Zurich and Strasbourg. Medicine, at the time, pushing new doors, exploring new areas, also majored there in 1878 in the nascent psychiatry, then working at the Berlin University Hospital.

His path seemed all mapped out, but the young man had an insatiable curiosity; no question of purring on site, he had to travel the world and thus left to the discovery of psychiatry for three years, from 1879 to 1881 in several countries. An exploration of the globe and mental illness which led the Pacific, including New Zealand, Samoa, Hawaii, where he met the man who would radically change his life, Adolf Bastian. 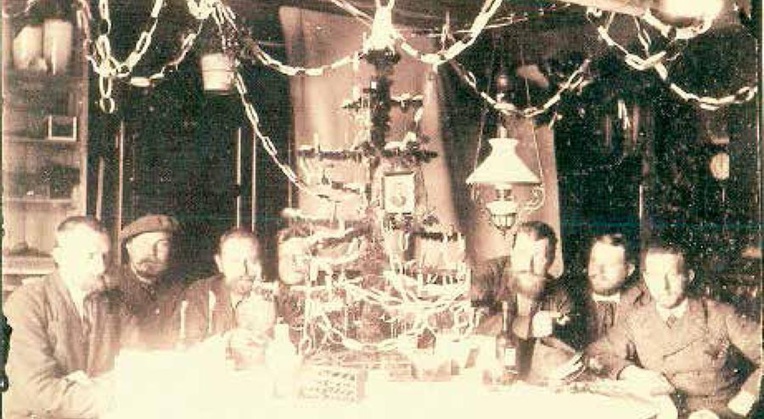 Christmas 1882 in South Georgia (Antarctic). Von Steinen is the third from the left.
The latter, a German citizen born in 1826, can be considered the father of two new science then, ethnology and anthropology. Famous in the second half of the nineteenth century for his stories and initiatives to recognize these two sciences, Bastian undertook many journeys, particularly in the Pacific where his path crossed that of the young and curious Karl von den Steinen.

Founder of the Berlin Anthropological Society, Ethnology and Prehistory (Berliner Gesellschaft für Anthropology, Ethnology und Ungerschichte), co-editor of the society’s journal, the Zeitschrift für Ethnology, also head of the Royal Geographical Society of Germany Bastian was a universal scholar, physician, writer, geographer, and this meeting was decisive for den Steinen.

Dazzled by these disciplines he knew very little, the young German doctor continued his journey in the Pacific on the way including the Solomon Islands, where he collected many artifacts, trying to understand these so-called primitive peoples. In 1882 and 1883, Germany organized a scientific expedition to South Georgia (Antarctic) and den Steinen was part of the polar adventure. On his return the deep south, he left the expedition in deciding to settle in Uruguay because it is there, he knew, he felt, he could actually be assertive and his passion for the ethnology. Montevideo was already a large city, counting many Germans and den Steinen was not lost. By 1884, he decided to go into the deep end and went to Brazil, more precisely in the middle of the Amazon, in order to explore the sources of the Xingu River. He went down on the 2200 km, arrived in Belem and returned by Rio de Janeiro where the Emperor of Brazil received him. 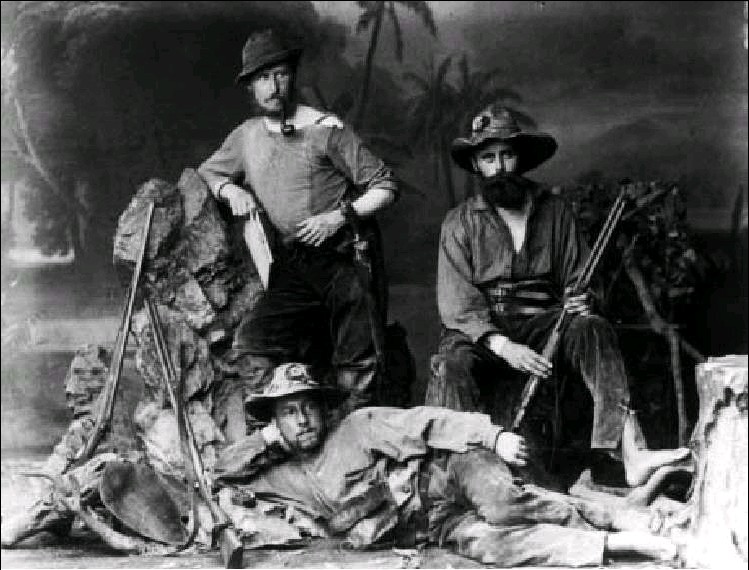 First expedition to the sources of the Xingu River in 1883. Steinen is right, with two German colleagues.
The German had understood that ethnology was not limited to the collection of objects; Certainly, he will bring very many in Germany in 1885 (he sold them to the Ethnological Museum in Berlin), but he made the effort, during this first stay in the forest to learn the languages of the tribes encountered.

A later book (Durch Central-Brasilien), there he returned to the course of the Xingu in 1887 where he literally immersed among the Indians of the region to deliver, Germany, the elements for understanding these isolated peoples.

At the time, this humanistic approach is somewhat revolutionary and earned him great fame, like the rainy season, much later, a Paul-Emile Victor to Greenland. His famous is so great that it is made an honorary doctor of the University of Halle and is elected president of the Geographical Society of Berlin. In 1894 he published what remains his masterpiece about the Amazon, Unter den Naturvölkern Central-Brazilians. He then thirty-nine years old, and rules the Ethnological Museum Berlin. Until 1906, he remained teaching at the highest level in his country known and recognized by his peers multiplying titles and functions.

“Half a century too late,” the Marquesas 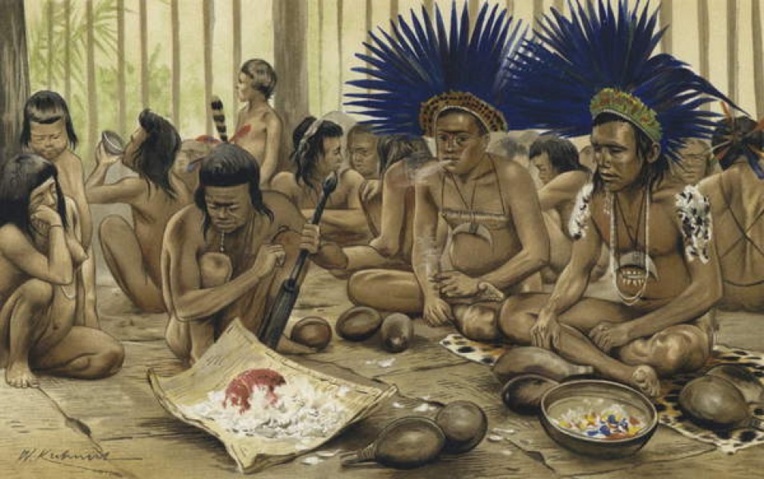 A death feast among the Bororo Indians, as described by von den Steinen, first white man to approach these Amazonian Indians.
During this period, the most auspicious of his career, Karl von den Steinen was given the task, by the Museum of Berlin, to conduct a study for six months in the Marquesas archipelago tackle it with the same curiosity humanist Amazonian tribes. He did not return unscathed, it is the least we can say, as devoted a very large part of the rest of his life (he died November 4, 1929, at the age of 74 years ) to identify all existing Marquesan objects in the world.

Concretely, he embarked in 1897 for Canada; after a stop in Vancouver, he reached San Francisco, in full fever because of the gold rush. From there, he embarked on a small schooner, the City of Papeete, which deposed the Twenty days later, on Nuku Hiva.

Von Steinen, when Solomon had happened, had made three observations: behind objects, there were men; these, face the blackbirders intending their labor to the plantations in Fiji and Queensland especially did not weight; these human groups, disunited, unarmed, vulnerable to imported illnesses would eventually disappear; three observations refit it on the banks of the Xingu in Brazil, where he met with tribes who have never seen or even suspected the existence of white men.

In the Marquesas, the anthropologist was a bitter fact: it was too late “about half a century too late,” he explained! The Marquesan people remained only a few shadows. A century of European contact, explorers, sandalwood, whaling, settlers, religious, were literally “cleaned” the Marquesas its original population (more than seventy thousand souls probably reduced the number of two to three thousand) ; Furthermore the population, objects characterizing this insular culture had, too, was raided, traded against weapons or alcohol.

Bring the past to the surface 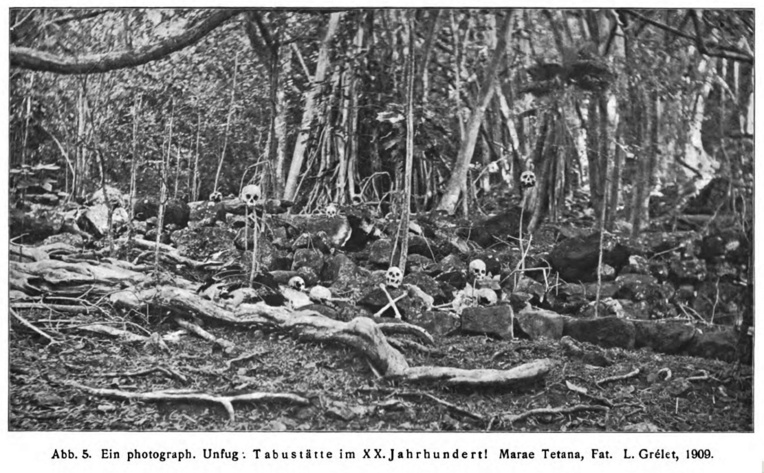 A Marquesan marae; the photo dates from 1909 and was made by Louis Cricket. The skulls were placed artificially, as a deliberately morbid staging and “savage.”
What could he cope with this disaster? The Germans are not people to give up. Von den Steinen courageously decided to do with what he had; the few witnesses, few people remember, he would question them endlessly, but always gently. He had to bring to the surface a past that disappeared over days. The tattoo, for example, was an essential feature of the culture of this people, tattoos playing the role of real identity of the carrier card. Failing to see them in young, he copied the grounds that the ancient survivors wore. Same with the objects of everyday life or those more valuable and rarest of ancient cults. Same with the language, with descriptions, with knowledge.

This upsetting painstaking, von den Steinen would not stop it by boarding the boat that would take him to Tahiti and New Zealand: the researcher wanted to actually control guns Maori art to better understand and interpret Marquesan art.

On his return to Germany, den Steinen was only forty-three years. He rejoined Germany, museums, universities, scientific circles until 1906. 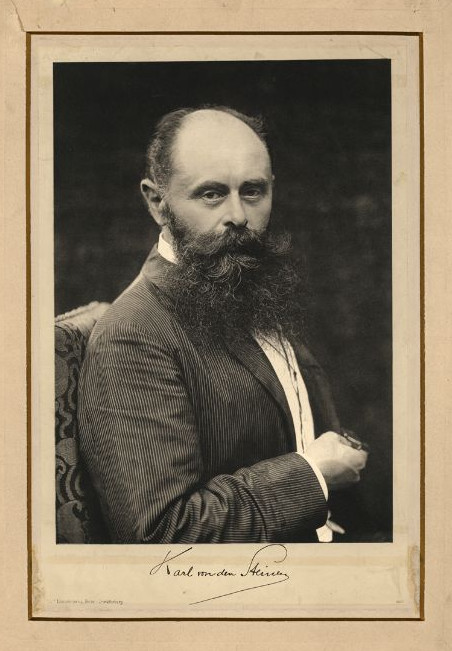 Very beautiful portrait of young gravure von den Steinen on his return from the Brazilian Amazon. Two expeditions won him great fame in his time.
T but fifty-one years, he decided to stop working “academically” speaking to no longer devote himself to the pursuit of his work on the Marquesas, conducting a census of the Marquesas parts brought in the West, putting them into perspective, their “translation”, or hear their usual ritual function.

For this, he visited all the museums of Europe, even the most modest in the province and those of the United States.

By this methodical painstaking, Karl von den Steinen brought out the Marquesas domain objects of curiosity cabinets to reveal to the world the true dimension, aesthetic, cultural and ritual.

His work, colossal, like no other, enabled him in 1925 to publish the first volume in 1928 and for volumes II and III of the reference work on the Terre des Hommes.

He continued to be passionate about ethnology, but his mission accomplished, he died in 1929, his house is always left open to all young researchers who wanted to meet him. 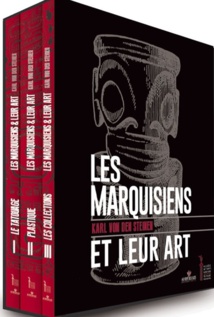 – The Marquesas and their art. Volume I: tattoo

– The Marquesas and their art. Volume II: the original ornamentation of the South Seas (plastic)

– The Marquesas and their art. Volume III: the original ornamentation of the South Seas (collections)

Here are the first introduction of Karl von den Steinen lines to his three books on the Marquesas “It always comes back to his first love! When I was young doctor, the strongest and most vivid impressions brought back from a trip around the world that had led me to Mexico, California, Japan, Java, the Indies and Egypt were without contests, those Polynesian islands where man and nature live in harmony and beauty unlike anywhere else in the world. ”

Later, he wrote about his systematic exploration in the Marquesas “from one valley to another by mountain ridges, all villages of the six inhabited islands, I lost twenty kilos … I noticed the lyrics of the songs and genealogies dating back to the dawn of time … My personal interest led me to these sacred stories of the homeland, the central Polynesia and other remote islands. “